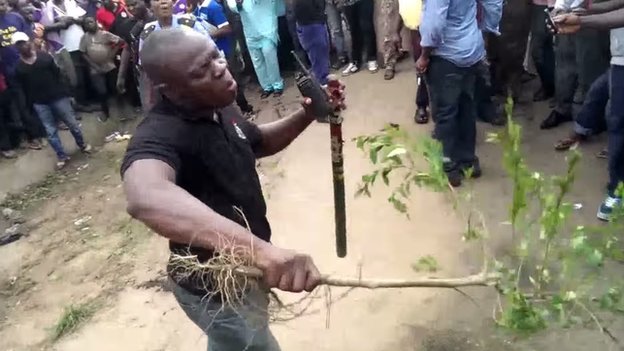 Footage of a badly burnt woman being berated by a crowd in Nigeria has been watched hundreds of thousands of times on YouTube.

The film begins in a blur. An angry mob and a policewoman can just be made out, gathered in a circle on the dusty ground. As the camera finds its focus, the grim reality becomes clear. In the middle of the circle sits a woman, almost naked, her body bloodied and burnt.

The title of the video, “Flying Bird turn into old woman in Oshodi”, doesn’t appear to explain the disturbing scene, but its description, and a local news article, combine to create an unusual narrative. Eyewitnesses quoted by the newspaper say a black bird had been flying in the sky over Oshodi, in Lagos, before striking an electrical cable, falling to earth and transforming into a woman. The same eyewitnesses say she confessed to being a witch.

The video, uploaded to YouTube on October 10, has been watched more than 215,000 times, and the figure is still growing fast. Similar videos of the distressed woman, shot by other members of the crowd, have also gained tens of thousands of views. Much of the reaction online suggests many believe the theory, and the film has even been the subject of comedy spin-offs on YouTube. But many express anger and concern as well: “This is truly barbaric,” reads one, and “it is a cover up [for] murder,” says another. The woman in the video died shortly after it was shot, as police took her to hospital.

Banke Idowu was one of those who filmed a video of the woman – in her case she was asked by a journalist friend to go to the scene. She tells BBC Trending that as she arrived, she was told about the metamorphosis by others in the crowd. She herself believes the explanation of witchcraft. “I’ve never seen it in real life, but I’ve heard about it and seen it in films, so when they said it happened, I believed it.” Asked if she failed in her duty to protect the woman, Idowu says that in stepping in, she would have been putting her own life at risk. “Some people may think you belong to the same cult, and they may end up attacking you.”

The journalist friend who asked her to visit – Adeola Fayehun – is based in New York, and heard what was happening on Twitter – showing how quickly news of the incident spread on social media.

Kenneth Nwosu, a police spokesperson, is unable to shed light on the events preceding the video. “We got a call that the mob was surrounding a woman at a bus stop. The priority was to save her life,” he says. In the film an official can be seen beating the crowd back with a branch. The police took the woman to hospital, but say she died on route. Nwosu says an autopsy will be performed to establish the cause of death. As yet, she remains unidentified, and no arrests have been made.

Accusations of witchcraft remain common in this part of the world, says Hermione Harris, a social anthropologist at the School of Oriental and African Studies in London. “In a secular society like ours it’s very hard to grasp a belief in supernatural forces.” But the notion of witches and wizards is embedded in a form of Pentecostal Christianity that is popular in Nigeria, she explains.

In New York, Fayehun is hopeful that the exposure the film has received on social media will start to change the way people behave in future. Whatever the crowd believed had happened to the woman, they still had a responsibility to help her, she says. “Now the video is out there, the people who were involved will start to rethink their decisions in situations like this.”