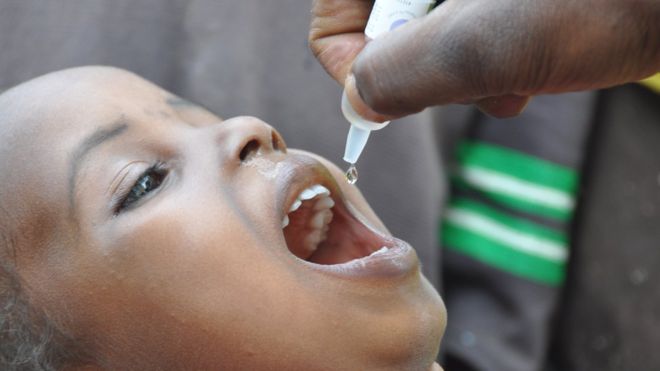 October 24 is World Polio Day. It was first marked a decade ago to fight polio. In the meantime, most African countries are now free of the disease.

Polio, a crippling and potentially fatal infectious disease, has no cure, but there are safe and effective vaccines. The disease can be prevented through immunization. At the moment, there are no more than three countries with cases of polio, and the World Health Organization (WHO) hopes this could be the last World Polio Day.

DW spoke to Sona Bari, spokesperson for polio eradication at WHO, about the progress made so far eradicating the disease.

DW: What’s the state of polio in Africa. Which countries still have polio cases and why?

Sona Bari: In Africa, only Nigeria has cases of wild polio virus and only four cases this year. As you know, three countries remain in the world that have polio: Afghanistan, Pakistan and Nigeria. So all of Africa is polio free and most of Nigeria, I should add, is polio free. Only three districts in Nigeria have reported polio. It really comes down to the fact that we have to reach every last child with a vaccine. In parts of the country with weak health systems and insecurity this is an incredible challenge. But this isn’t a challenge that we can’t meet. We have made it before in Nigeria, we have made it in many other countries with insecurity and weak health systems, some much weaker than Nigeria. And when we can reach every last child we can definitely eradicate polio in Africa.

We know what causes polio and there is a vaccine for it. Why has it been so difficult to eradicate it as compared to more serious epidemics like Ebola?

The virus is very good at finding children and paralyzing them. We must be better than the virus and find the children. Having a vaccine is not enough. That vaccine has to be available to everybody. And now that we are down to the very last few places, of course these are the most difficult places.

Could this year be the last annual day for polio before the disease is finally eradicated?

You know, it very well could be. Eradication is one stop on the train. Once we stop the transmission of polio we have to change trains for another series of checking and verifying that we have stopped it. We are in the best place ever to get there because we have the fewest cases, only 27 cases this year. In any disease 99.9 percent decrease is a cause for success and celebration. We have the fewest cases in the fewest places on Earth right now. So we have a good chance that this could be the last World Polio Day.

We have been very fortunate. The Global Polio Eradication Initiative, which was a vision of Rotary International, was embraced by every single government in the world. So that is a huge statement of political support. We have had incredibly generous donors engage governments; right now in Pakistan, Afghanistan and Nigeria, the head of state monitors progress against polio. We have had generous and sustained donors starting with individual Rotarians, through to governments and private foundations. Right now all we need is $1.3 billion (1.2 billion euros) more for a program that will forever erase this disease and deliver savings of about $50 billion by the time the program is over and that is helping 15 million people walk today who would have been paralyzed by polio.

Sona Bari is the spokesperson for polio eradication at the World Health Organization.
Interview: Isaac Mugabi