The recently published report by Steve Hanke, an economist from John Hopkins University in Baltimore, United state, listed Nigeria among the first ten (10) miserable countries in the world.

However, Argentina jumped to the No. 2 spot after yet another peso crisis. Since its founding, Argentina has been burdened with numerous economic crises. Most can be laid at the feet of domestic mismanagement and currency problems (read: currency collapses).

Iran took third in the ranking, before Brazil that made it to the fourth position. Turkey took the fifth position as the giant of Africa Nigeria emerged sixth.

For Nigeria, unemployment rate was the major contributing factor to its miserable state.

According to Hanke, “The first Misery Index was constructed by economist Art Okun in the 1960s as a way to provide President Lyndon Johnson with an easily digestible snapshot of the economy. That original Misery Index was just a simple sum of a nation’s annual inflation rate and its unemployment rate. The Index has been modified several times, first by Robert Barro of Harvard and then by myself.

My modified Misery Index is the sum of the unemployment, inflation and bank lending rates, minus the percentage change in real GDP per capita. Higher readings on the first three elements are “bad” and make people more miserable. These are offset by a “good” (GDP per capita growth), which is subtracted from the sum of the “bads.” A higher Misery Index score reflects a higher level of “misery,” and it’s a simple enough metric that a busy president, without time for extensive economic briefings, can understand at a glance.

The accompanying table contains Misery Index rankings for the 95 nations that report relevant data on a timely basis. For consistency and comparability, and with few exceptions, data were retrieved from the Economist Intelligence Unit.” 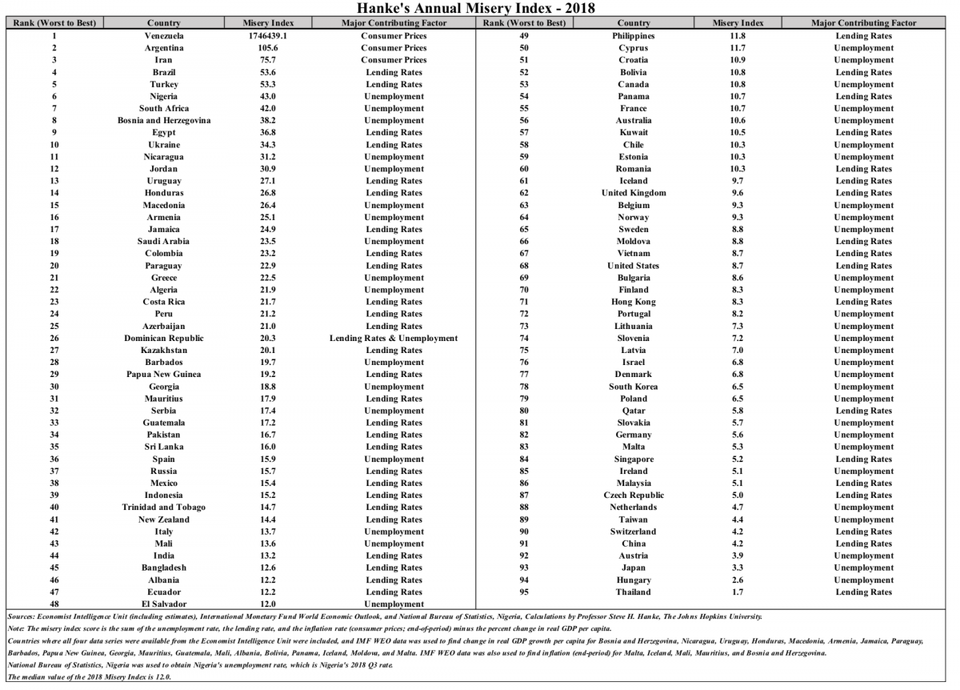