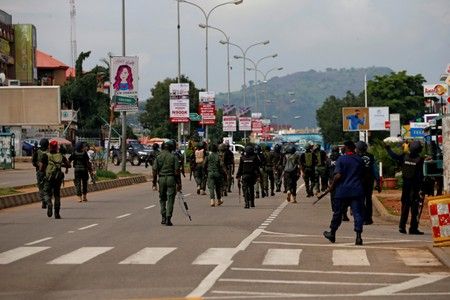 Nigeria’s government has banned a Shi’ite Muslim group whose followers have been holding protests to demand the release of their detained leader, accusing the group of inciting violence.

At least 20 members of the Islamic Movement of Nigeria have been killed over the past week during a series of protests that have shown little sign of abating, raising pressure on the government.

Nigerian police have responded with teargas and gunfire to the protests and a court on Saturday granted the government permission to label the group a terrorist organization.

The group, Nigeria’s biggest Shi’ite organization, can appeal the ruling. Its members have been marching in the capital Abuja calling for the release of leader Ibrahim Zakzaky, who has been in detention since 2015 despite a court order to release him.

He was arrested when the army killed roughly 350 of his followers at his compound and a nearby mosque and burial ground in northern Kaduna state. A court Kaduna is set to decide on Zakzaky’s bail application on Monday.

In a statement, a spokesman for the Shi’ite group said it had not seen any formal notice of a ban and accused the government of seeking to block its leader from being released.

In a tweet, the Nigerian presidency said it had only outlawed criminal behavior and that Shi’ites were free to observe practices like daily prayers and pilgrimages to Mecca.

“The proscription of Islamic Movement of Nigeria has nothing to do with banning the larger numbers of peaceful and law abiding Shiites in the country from practicing their religion,” the presidency said in a tweet.