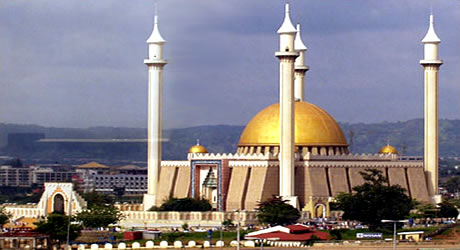 Abuja, city and capital of Nigeria. It lies in the central part of the Abuja federal capital territory (created 1976), approximately 300 miles (480 km) northeast of Lagos, the former capital (until 1991). During the 1980s the new capital city (designed by the Department of Architecture of Ahmadu Bello University in Zaria) was built and developed on the grass-covered Chukuku Hills.

The site was chosen for Nigeria‚Äôs new capital because of its central location, easy accessibility, salubrious climate, low population density, and the availability of land for future expansion.

It was the first planned city to be built in Nigeria. Abuja lies at 1,180 feet (360 m) above sea level and has a cooler climate and less humidity than is found in Lagos. The city was planned with a projected population of about 25,000 in the early stages of occupation and is divided into two zones.

The central area contains the National Assembly, the city hall, national cultural institutes, and other government-related offices. The other zone provides housing, shopping facilities, and other urban amenities. The University of Abuja was founded in 1988.

Abuja has an airport, and expressways connect the federal capital with other state capitals. High-tension power lines conduct electricity to the city from Shiroro Dam, on the Niger River, 46 miles (75 km) southwest of Abuja.