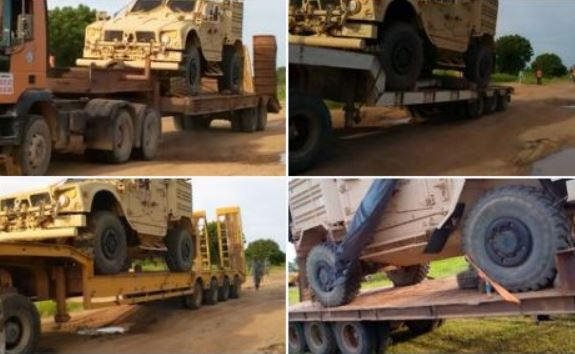 The Nigeria Customs Service (NCS) on Sunday said the military equipment that were recently intercepted by Nigerian authorities were bound for Niger Republic.

Joseph Attah, a spokesperson for the Customs, told PREMIUM TIMES six drivers attached to the vehicles were also held by Nigerian authorities.

Six mine-resistance all-terrain vehicles were seized by Nigerian soldiers in Adamawa State earlier this week and handed over to the Customs on Saturday.

The heavily fortified equipment were being conveyed without appropriate documentation, including their ownership, source and destination, when they were seized by Nigerian soldiers in Fufore Local Government Area.

The equipment were later handed over to the Customs by the Nigerian Army 23 Armoured Brigade at a low-key ceremony in Konkol, Adamawa State.

PREMIUM TIMES broke the news of the seizure shortly after the equipment were handed over to the Customs on Saturday afternoon.

Military sources said the conditions under which the equipment were being transported were suspicious, especially in a region that has been racked by a 10-year-long insurgency.

Adamawa, alongside Borno and Yobe, have been the three most affected states by the devastating toll of Boko Haram menace.

Nigerians expressed deep concerns over how the equipment could be moved within Nigeria’s borders without being detected for a while, especially coming months after Ibikunle Amosun, a senator and ally of President Muhammadu Buhari, turned over his large cache of illegally-stockpiled ammunition to the police.

It also threw up suspicion that the country’s porous security architecture might have enabled movements of similar controlled-equipment across the country in larger country under the radar.

But on Sunday, the Customs said Nigerians should see the seizure as a manifestation of pragmatic measures of security and law enforcement agencies.

“There was no evidence that proper transit procedure had been followed by those moving the equipment,” Mr Attah said. “This was quickly detected by a combined team of Customs, military and the State Security Service.”

Mr Attah said the drivers conveying the military hardware said they left Cameroon and on their way to Niger Republic.

“Nigeria appears to be a transit route for the equipment,” Mr Attah said. “But even then, moving them would require clearance from the Office of the National Security Adviser, in addition to several other procedures that must be followed.”

Mr Attah said Customs was asked to take charge of the equipment because it has statutory responsibility “over anything that is crossing through Nigerian borders.”

The Nigerian Army and the SSS have not issued public statements about the seized equipment.