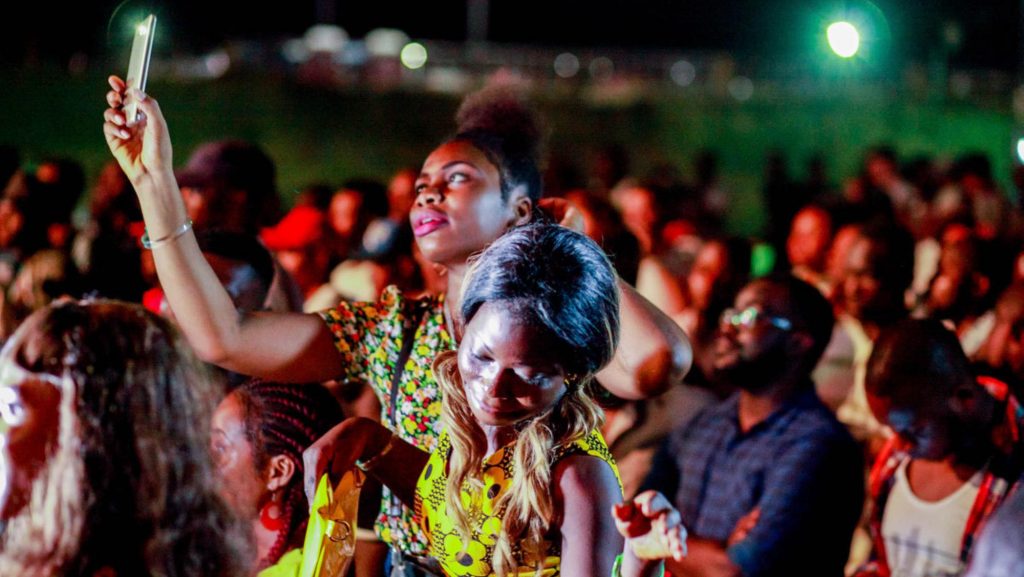 Each night as darkness descends on Lagos, Nigeria’s commercial capital, sweat-drenched young men and women descend on the megacity’s numerous nightclubs to dance to the latest hit songs.

Much like the famous “Nollywood” film industry, music is now big business in Africa’s most populous nation.

The music industry’s revenue from music sales was US$56 million in 2015 and is forecast to grow to US$88 million in 2019, auditing firm Pricewaterhouse Coopers (PwC) reported last year.

It said the country’s entertainment and media industry had an estimated total revenue of US$4.8 billion in 2015 and is likely to grow to some US$8.1 billion in 2019, making it “the fastest-expanding major market globally”.

As in many Nigerian cities, music is inescapable in Lagos, whose 21 million inhabitants can hear popular songs in the form of mobile phone ringtones or blaring out of speakers on the private transit buses, known as danfos, that are ubiquitous.

Artists who sing and rap over electronic backing tracks, in a genre known as Afrobeats, have seen their popularity in Nigeria spill over into record sales and sold-out concerts across Africa and in both Britain and the United States.

In May, Wizkid – one of Nigeria’s most popular artists – reached the top of the U.S. singles chart in a collaboration with Canadian rapper Drake.

It is not the first time Nigerian music has found popularity overseas. Singer Fela Kuti established a cult following in the 1970s among fans of his high-octane sound fusing brass instruments, organs and guitars.

But the new wave of artists – such as D’Banj, Tiwa Savage and P-Square – have developed a broad fan base that has made music a major cultural export for the West African country.

“With the advent of social media the music is more readily available outside, beyond the shores of the country,” said Deji Awokoya, general manager of Megaletrics Ltd which operates three Lagos radio stations and set up another in Britain’s capital, London, four months ago.

This cross-cultural appeal also means artists raised overseas have collaborated with Nigerian artists or, like singer Temi Dollface, chosen to join the legion of thousands of “repats” who relocate to their country of origin each year.

“I wanted to incorporate Nigerian history and folklore into what I’m doing – something that I didn’t do as much when I was growing up,” said the Nigerian-born artist, real name Temitope Phil-Ebosie, whose sound blends soul, jazz and pop.

Some argue that, if properly harnessed, money raised from Nigeria’s burgeoning music scene could be used to address the nation’s economic difficulties.

Nigeria overtook South Africa as the continent’s biggest economy in 2014 – giving it an annual output of around US$500 billion – after a GDP rebasing exercise factored in certain sectors such as the entertainment industry.

Two years later, Nigeria is going through its worst economic crisis in decades, with the economy contracting by 0.4 percent in the first quarter and a recession seemingly imminent.

The Nigerian arts, entertainment and recreation sector bucked the downward trend in the wider economy, growing in real terms by 8.41 percent year-on-year in the first three months of 2016, according to National Bureau of Statistics figures.

But there is room for growth, since the sector only contributed 0.26 percent to real GDP in the first quarter of this year, the statistics office said.

“Once the government understands that they can make money, they can generate revenues from this… I think they will help to protect ,” Asa, one of Nigeria’s most internationally successful singer-songwriters, told Reuters.

Music sales could provide a much needed revenue source if the industry were properly regulated and bootlegging curbed, Asa – whose folk-inflected acoustic sound contrasts with the upbeat Afrobeats genre – said ahead of a concert in Lagos.

“Artists can pay taxes. Taxes would help with building roads, creating electricity,” she said. “We need to establish a collecting society so that when radio play the songs, they pay. And then something goes to you, as the government, to help build a good country.”

Collecting tax revenues is difficult in most sectors in a country where around 80 percent of the work force are part of the informal economy.

However, in the last few years, the majority of Nigerian music industry earnings have come from telecommunications firms, for the use of mobile ringtones, and from other corporations through brand endorsements, as well as music downloads.