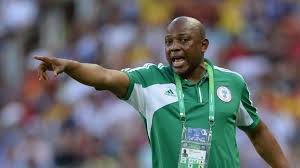 Stephen Keshi, a winner of the Africa Cup of Nations as a player and coach with the Super Eagles, has died aged 54.

The football legend passed away early on Wednesday after a suspected heart attack in Benin City, Southern Nigeria, according to his brother and manager Emmanuel Ado.

“Our son, brother, father, father-in-law, brother-in-law, has gone to be with his wife of 35 years Mrs Kate Keshi, who passed on the 9th of December 2015,” said Ado in a statement.

“Since her death, Keshi has been in mourning. He came back to Nigeria to be with her. He had planned to fly back [to the US] today, before he suffered a cardiac arrest. He has found rest. We thank God for his life.”

Keshi played in five different African Cup of Nations tournaments, captaining the Super Eagles team to their second continental success in 1994 in Tunisia.

He was instrumental as Nigeria made their maiden appearance at the 1994 FIFA World Cup in the US where they reached the second round before losing to Italy.

He played professionally in Ivory Coast, Belgium, France, the US and Malaysia. He also managed the national teams of Togo and Mali.

Appointed coach of the Nigerian team in November 2011, he handled the Super Eagles over four spells, leading them to the 2013 African Cup of Nations title in South Africa – becoming only the second man to win it as a player and a coach – as well as the last 16 at the 2014 World Cup in Brazil.

There is pride in his achievements, sadness at his death and disappointment at the timing of his exit.

“I’m shocked and saddened by the devastating loss of Big Boss, a father and coach who gave many of us a chance to live our dreams,” Lazio midfielder Ogenyi Onazi, who made his senior debut under Keshi, told Al Jazeera.

Another current Nigeria player, Odion Ighalo, added: “What a tragic day. He was one of Nigeria’s greats without doubt; he was a father, mentor and above all a legend. It’s just a sad day.”

Among those paying tribute to him was the Nigeria Football Federation (NFF) vice-president Shehu Dikko, who expressed the shock of “the Nigerian football family” at Keshi’s death.

“His name will for ever shine the brightest in Nigerian football because his tremendous success and achievements transcend his country and continent,” Dikko said.

“Death is never right at any age but Keshi leaving us at this age is sad for Nigerian, African and world football.

Keshi is fondly remembered for helping tiny Togo to qualify for their first – and to date only – appearance at the World Cup finals, but was sacked a few months before Germany 2006.