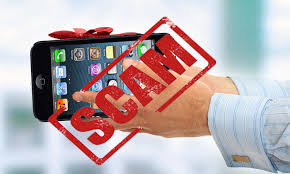 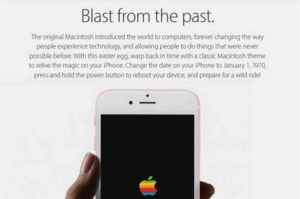 Apple is warning people not to break their iPhones by falling for an internet prank.

The online hoax tells users if they change the date of their device to January 1, 1970, they will unlock a retro Apple logo.

In fact, the change can cause phones and tablets to become stuck in a reboot loop and never switch on again.

The fact Apple wasn’t even formed until 1976 gives a clue that the hack is bogus.

Affected devices include the iPad Air, Mini 2 and any iPhone 5s onwards.

The bug emerged last week , but since then cruel pranksters have circulated the hoax to trick people into busting their devices.

If users change the date on their phone, the fake advert claims it will don a “classic Macintosh theme” featuring the company’s original 1970s multicolour logo.

“Reboot your device and prepare for a wild ride,” the hoax suggests.

After shutting down, the device became stuck on the white opening screen with the Apple logo, and refuses to reboot.

Manually restoring the device through iTunes doesn’t seem to work, so the only fix for victims of the prank is to pay a visit to their local Apple store.

The bug reportedly affects any iOS device with a 64 bit processor, including the iPhone 5s, 6, 6 Plus, 6s and 6s Plus, the iPad Air 2, the iPad Mini 3 and 4, and the sixth-generation iPod Touch.

However, the time zone may also have an impact, with some users in the Eastern Hemisphere claiming that changing the date did not brick their iPhones.

‘Bricking’ is when your phone or device is permanently broken, becoming an expensive paperweight.

It has been suggested this was because the iPhone stores the date in GMT so, in some time zones, changing to January 1 1970 will set its internal clock below zero.